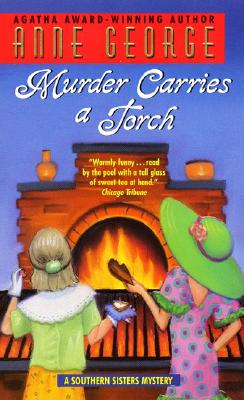 Those laughable, lovable Southern Sisters, sensible Patricia Ann and her off-the-wall sibling, Mary Alice, are just back from vacation in time to be greeted by cousin Pukey Lukey, who's in a terrible state. His wife of 40 years has run off with a housepainter/preacher and he's begging the sisters to help him chase down the pair. But when the three start snooping around the sacred grounds at the top of Mount Chandler, they find a dead body. Mary Alice and Patricia Anne have plenty of questions to ask, including how Luke's still-missing wife fits into the picture-and who tossed a live rattlesnake intot he sisters' very own car.

Though unalike as snowflakes, sisters Patricia Anne and Mary Alice share a sympathetic heart for their distraught cousin Luke -- known affectionately in his boyhood as "Pukey Lukey," because of his penchant for getting sick in moving vehicles. Luke is desperate to hunt down Virginia, his wife of forty years, who has run off with a housepainter/snake-handling preacher named "Monk." And the sisters have graciously agreed to accompany their stricken kinsman on his search...in Luke's car, of course.

But, while practical "Mouse" and flamboyant "Sister" are unable to find their runaway cousin-in-law among the asp-loving faithful on Chandler Mountain, they do manage to stumble upon the corpse of a pretty young redhead who was prematurely sent to her eternal reward. And before you can say "anaconda," they are hot on the serpentine trail of a killer who'd like nothing better than to sink a pair of poisonous fangs into two meddling Southern sisters