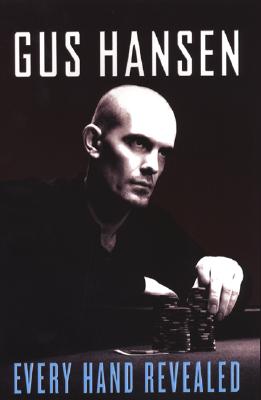 What If You Were Able To Get Right Inside The Mind Of World-Famous Poker Pro Gus Hansen-- And Learn His Winning Secrets?

Now You Can. One of professional poker's most intriguing and fascinating players, Gus Hansen has often been called "The Madman" for his crazy, fearless, aggressive style. But you can't dispute the fact that this poker superstar knows how to win--and win big. The holder of the inaugural Poker Superstars Invitational title as well as the only player to win three World Poker Tour tournaments, Gus won his fifth major international title when he became the 2007 Aussie Millions Champion, outlasting 747 players and nabbing $1.2 million. Now, for the first time ever, Gus analyzes the hands that he played during the tournament and reveals his secrets for winning in Every Hand Revealed. You'll learn:
- An extensive, easy-to-follow analysis of the more than 300 hands he played during the Aussie Millions. . . - The radical, yet coolly logical, methods behind Gus's "madness" that have helped him to win consistently. . . - Each and every bluff, precise calculation, educated guess, and read of his opponents . . . - How to call large bets with seemingly unplayable hands. . . - When to raise out of position with garbage holdings. . . - How the prize structure should influence your play. . . - And much more Offering unlimited access to one of the most successful, popular poker players out there, Every Hand Revealed will help you understand some of poker's most coveted secrets--and simply shows you the right way to play the game whether you're a beginner or a poker pro. Now with Gus Hansen by your side, you too can turbo-charge your game and watch it take off Superstar poker pro Gus Hansen has shaken up the poker world with his loose, aggressive style. Called "The Great Dane" as well as "The Madman," the five-time international title-holder transforms his hands with cool logic . . .and flattens his opponents. Voted one of the world's sexiest men by People Magazine, Gus is an avid athlete, backgammon player, and poker commentator for both Danish and American T.V.